so swift and final the violence

“The absence of hesitation surprised me, so swift and final the violence…

“Legend told of Brigand, a brigand not the basest of knaves. Children, for instance, were never harmed, but entertained. No man without means was robbed. The porter’s 3 pretty, silver pennies never touched.

“Only the wealthy much worried about travel through local wilds.

“Seeing as my lot and pleasure was to experience all the varied paths of men, I thought to join Brigand’s bright band of thieves. Shortly, I procured the necessary items to pose as a poor yeoman upon a pilgrimage.

“At the head of our party rode a discontent Curate. His back he kept as stiff and as pompous as a polished board from foreign climes.  On each of his fingers sat a silver filigreed ring of shining brass.

“Most of the rest of us matched my supposed standing quite closely, both women and men. There were, however also, two beggars in our train. (One reported to a parish priest.)

“The day had begun as damp and glum as the Curate’s breathsome prayer. Gathered close about the shrine to Gawain’s Tearful Fast, we lamented our multitude of sins. For how else but through the wrath of God would the Curate have eaten such a quantity of buttered onion stew?

“We rode slowly through the darkening morning, much hampered by the Friar and unvowed beggar’s shared mule. As thunder broke across the scrape of shod hooves against wet stone, so too did the Curate launch into a halfhearted fire and brimstone exhortation to stay far from damning sin.

“The storm never quite came. The Curate never stopped preaching. Naught but lichen and stiff sage grass grew amongst the valley’s tumbled prosperity of gray stones. Empty words, empty wilds pointed the minds’ eyes of our line firmly inward. A proper start to a trip of penance and absolution, I daresay.

“That night we erected our damp camp, and during, and this I swear, I saw a boulder’s shadow fly away from it and into the hills. It was quick forgot, for the Friar by whisper announced our previous host had given alms in the form a flask of fine brandy.

“The Curate’s prayer was blessfully short. We broke our fast with strong drink, mere moments after that Penitent Vicar retired to his velvet lined tent. The night came quiet and cheerfully though we bedded atop cold stones.

“Dawn broke, and the day carried us past the grass and naked stones, into a wet and ancient wood. Leaves lay in deep layers both making and muffling noise. Crinkles and drippling sounds rang clear and loud like a well struck bell. All other noise were swallowed up.

“Our quieted voices seldom gave try. We rode instead in somber reflection, the weight of God’s eye on our bowed heads.

“Suddenly a burst of wind and rain obscured the path in a torrent of shed leaves. The horses slipped and the way could not be clearly discerned in dying light.

“Thus began our miserable stay underneath a cedar tree in heavy rain. Two young men were missing when we awoke. Most suspected they had fled for home at some point in the unpleasant night.

“We trudged on, with four days ahead until our destination rather than two. The Friar complained most of the day so no one took worry at his absence come the next morning. More alarming was the absence of an elderly fellow of good spirit and boundless cheer. All the more so since his daughter remained in our cursed train.

“She cried frequently but pressed somehow ahead. We exchanged worried glances and stopped for prayer more frequently as the gray day went forward.

“The Curate gave us dispensation to build a fire that night and all of use huddled near. The wood was too green, took too much tending, and made too much smoke. No one slept for more than a wink. Even the Curate seemed restless. He flashed wide eyes and chattered yellow teeth while withdrawing into his tent.

“The next morning the Curate prayed loudly. With little conviction, in a shaking voice he begged God to show mercy. We walked now sans two further young men. Only 6 men, two women, and the hunched beggar in so many layers of rags pressed onward behind our muttering Curate. When we stopped near noon to rest and water ourselves, our ragged scrounger was found to be absent.

“Higher and higher the path wound. Darker and darker stirred my thoughts. Even my secret purpose was forgot as death-come-mystery seemed to dance all about us.

“On the morrow, we awoke to find the Curate had crudely threshed and cooked a small pot of horse-oats. His face was pink with movement and purpose. Onward we walked, glad for warm if crude food resting in our bellies.

“The day was a gray blur of cold and dogged marching. Winter already roosted in the hills betwixt us and geographical salvation. I’m not quite sure how I took notice of young Wilem peering ‘round an old oak tree to the side of the road. The very Wilem, who two days previous had abandoned us.

“He raised a single finger to his lips and gripped a spear in his second fist. Somehow I choked down my fear and made ready to give cry.

“Until of a sudden, I felt a sharp, cold point pressed against the back of my neck.

“ ‘Be still and you’ve no need to fear,’ the tearful daughter whispered firmly from behind.

“I froze as instructed. In short order we were ambushed fully by the missing members of our party.

“After being lined up and held at point of blade, it came as no little shock when ‘father’ and ‘daughter’ exchanged a singularly unchaste kiss. The old man’s lame leg and bent back seemed miraculously cured. In fact, the fellow seemed more alive and virile than any other soul present.

“He extracted from each man and woman remaining a pair of silver pennies. From the pompous-come-pitiful Curate, he took the ten rings, 113 pence, and the velvet lined tent.

“The brigand spoke with a voice perfectly loud enough to be heard, but no more.

“ ‘Good people I speak to you -- and to you as well, priest. Turn back. The way ahead is shorter, but none of you will walk it. An hour behind, in a hollow beech tree, you’ll find food enough to keep you living.’

“ ‘But what of our holy oaths!...’ the priest could not help but interject. A yelp of pain followed quick on its heels.

“The gray fellow wiped blood from his knuckles.

“ ‘Be that as it may,’ the bandit leader continued, ‘Walk that way and you shall meet your god.’

“Somewhere in the distance, a crow let loose a forlorn caw. We waited in painful silence. Wilem sneezed, and we winced.

“ ‘Go on, and don’t look back till you reach that tree,’ the old man instructed us. ‘Unless, would any of you lot peradventure to join our happy band?’

All but myself numbly fled. Brigand, for I am sure it was he of legend, Brigand then raked my soul across the coals with one steady look.

“Ruddy faced Wilem clapped me on the back, and after our leader we followed.

“I spent the next month on chores and learning swordplay. Several well appointed camps dotted the wild countryside, and I was tasked with tending to each one between brief and brutal lessons. I never did learn the true number of our host. Men and woman forever came and went on mysterious errands.

“A month in the wilderness is like a season in the city. Time stretches until it has no meaning beyond day and night, the division of labor and sleep.

“Finally, I was gifted a pair of bullock daggers. My chores were mostly offloaded onto newer recruits, and I was eventually made an accessory to a crime I could not have suspected. The first few, however, fed me well in the fantasy of calm and collected banditry.

“There was the tinker, swaying from a morning flask atop his wagon. Raised his hands moments ahead of our reveal and robbery. Brigand wasn’t along so young Wilem had charge of three ruffians as well as myself. We took from him a halfpenny, and Wilem had from him an long and athletic conversation within a convenient thicket. I remarked how odd it was the way in which Wilem bit his bottom lip as the tinker approached. The lads exchanged uncomfortable glances. Friggett, the Man-Breaker, barked her throatful laughter.

“I knew, of course. Humans are just such an absurd phenomena as we all know, my comrades.

“We traded too much silver for a pair of useful saws. We took a pinch of saffron from a middling merchant. (I’ve never had a better cooked forest hen than that night, I swear it.) We took sup with destitute yeomen headed to foreign soil, seeking a desperate chance toward a new life. Each child with them was gifted one of Friggett’s famous mince pies for their very own.

“Then came the Duke’s nephew.

“With him rolled a wagon filled full of silver and spice. This bookended by five and ten men-at-arms, back and front. Two days behind them, the King’s personal Secretary and 40 heartless and scarred Doppelsöldners rode with terrible haste. The Nephew, seeking distant shores, had cut through the southwest corner of our wood.

“Truth be told, my fellows held more tension than on an average exchange. I do not feel worry for defeat concerned them. We melted through faster and parallel paths, unseen. Our numbers more than doubled the Nephew’s ragged guard. We would have perfect surprise. I could not comprehend their apprehension at all.

“The sudden volley of arrow, bolt, and stone gave terrible answer. Unarmored, the horses were pincushioned unto death. By the earthly god, there was such terrible din, such a waste fine horse.
“In wake of our terror, surrender came without hesitation. By happenstance, I held no prisoner and it befell me to walk alongside the loose confident stride of our leader. It brought to mind a tiger on the prowl, though he certainly was not so sinuous.  Jauntily, a cleaverish falchion rested upon his shoulder.

“The sullen Nephew awaited us on his knees, vibrant silk breeches ruined in the horse blood mud. Without warning the sword swung down. Blood burst, a fountain from the Nephew’s split skull. Two more unneeded blows, backed with Brigand's strength and disregard, mangled the man with ferocious rends. With no more change of demeanor than one chopping wood, Brigand brought up a severed arm with a toss.

“Brigand took note finally of my shock while tugging a gold ring from a blood-slick finger.

“ ‘No man alive with gold on his fingers,’ he proclaimed, ‘didn’t buy them in another’s blood.’

“He then slid it on his own finger with smile and a wink… and I could take no more. I discorporated and returned to these very halls.

“And that my fellows, was my first time! 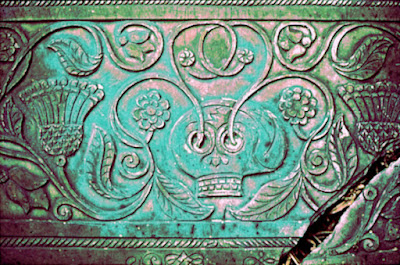 Posted by Evey Lockhart at 1:32 PM No comments: