Nervously he straightened his long yellow tie. Dim comfort flushed in silk across his fingertips.

It wasn’t fair. He hated these things. He hated his mistress.

Larry hated the very notion that he might lose her. He owed her everything.

The word ranged across his mind; volume and mass oscillated, but the trend was upward.
It wouldn’t be long. He knew. All these loud men, that smorgasbord of grey and black suits, sooner or later they would do it.

Larry could not fucking stand Greg. He hated the loud fuck, no doubt. More than that though, Larry hated how beet red his face was getting.

Clarkson already had his monster out. The mass of the thing…

Soon, Larry was pressed on all sides. Tentacles and liquid shadows brushed against cold glowing chitinous exoskeletons, and so much more besides.

When the cages were torn wide open, when the slaves scattered across Mr. Callister’s garden, only then did Larry assume his immortal form.

Larry and his almost nice suit, his sagging skin, that ugly blob of a nose, immolated from within. In his place, floated a seahorse like creature built out of flame, shame, and self loathing.

At least the slaughter was satisfying, sort of. 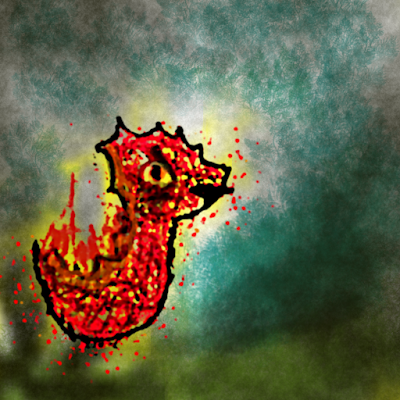 Posted by Evey Lockhart at 8:04 PM No comments: