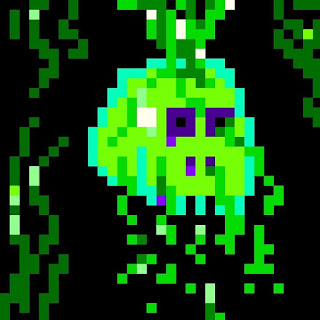 I don’t play video games. At all, really.

The last videah game I gave a continuous-fuck about was Kingdom ofLoathing: browser based, stick figure art, surreal stupid fantasy, a surprising number of They Might Be Giants references. It’s a game almost made for me visually and thematically. And now I can play it for maybe a few hours before just being done for a few years.

Video games used to be very important to me. Then, somehow, they became inimical to my identity for a long time.

B/c of course, being the excessive sort of bitch I am, I was loudly (and drunkenly) almost anti-video game in my twenties. Which is stupid. Jesus fuck, that’s dumb. Why was I so dumb?

No one answer that.

Anyway, I’m still trying to suss out what the fuck happened. That’s, I guess, the purpose of this essay. (Which I am writing to the sounds of chiptune punk.)

As a little girl, I cormorously consumed NES games. It was a reliable escape. It was a group(ish) activity my increasingly fat ass could participate in without revealing how out of breath I’d gotten so soon. (Or how dumb-fuckedly sweaty I’d gotten for no godsdamned reason.)

More than that, it’s something that lends itself to dissociation. Play that weird Looney Tunes game for a several hours. Remember maybe the first and last minutes with any more clarity that a half forgotten dream.

I got to be Princess Peach. I think she’s the only character I’ve actually beaten Mario 2 with.

But being Princess Peach was important in a way I couldn’t articulate at the time. I got to be a girl, with no one questioning or mocking me too intently for it. ALSO, her cute- ass, pink dress was a thing of power. I quietly loved her with an intensity. (I read so many Mario Bros books, drew so many Mario Bros, religiously watched that weird fucking cartoon...)

Then, I just didn’t care. It happened with comic books too.

My standard explanation was always, “...and then I found DnD so what the fuck did I need this shit for?!” It’s an assumption I had not questioned in a long time.

So what actually happened?

Some of it was probably that I’m not that great at them.

Some of it was almost definitely just, just one less thing to fight with my grandparents over. DnD, Magic the Gathering, etc.: all banned eventually, only ever weren’t because I fought tooth and nail to try in the first place. Video games were a precarious category, always on the verge of being banned. Comics too.

I gave up. To make it more bearable, I made their banishment my own decision.

outdated hierarchical thought (with commentary from the me that is now)
I dunno.

Video games are an incredibly important part of my past. As I was reminded by the music on Unikitty!, 8 bit-ish video game noises are deeply good sounds for me. Pixel art often flips those same sort of switches in my brain.

Still some residual resistance to the idea of playing video in my brain, but I dunno I can recognize and appreciate them a bit more now.

So growth or whatever. I don’t have a point.

The mutable vagaries of my psyche still often surprise me.

And when I’m in the right mood, I play Scorched Earth.

Posted by Evey Lockhart at 2:00 PM